Coming from years of fishing the gulf stream waters off Miami beach, fishing the waters of New England was initially a challenge. Not to mention completely different.

Using a tube and worm, or live bait like mackerel were completely different concepts. As well as the type of fish you catch are drastically different. Saltwater fishing in Florida for game fish was a blast. 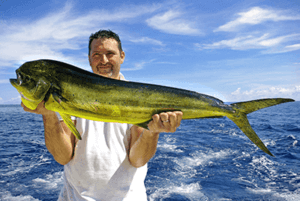 We went from Mahi Mahi and King Mackerel, to the rocky shorelines of Cape Cod and the like for Tautog, Bluefish and Striped bass. Over time, however, we learned and became successful.

One thing we learned is there is no fish more sought after than the striped bass. Striped bass are considered for many as the high point of the region’s recreational fish.

Hauling in a big bass using natural baits like live eels can be a great time. Coming in both medium and “Cow” sizes, striper fishing is an exciting fishing charter for families as well as seasoned anglers. They are also served up in many seafood restaurants as a delectable meal.

In this post I will share a couple methods we use for striped bass fishing in New England. 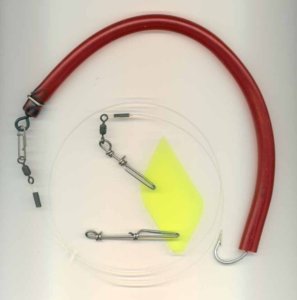 I’m sure most everyone has heard of this method by now. Nonetheless, lets talk about it. The Tube and Worm has for years brought in some seriously big Stripers.

We have landed many 40+ inch striped bass over the years on our charters using the tube and worm. This method is both simple, and effective.

What it involves is a colored tube.  Kind of like a soft plastic. I’m particular to red, between one to one and a half feet in length.

At the end is a single appropriately sized hook covered with a seaworm. We would often put a 50-pound leader wire on as well. Refer to the image below.

Once the water temperature cooperates we would head out to Block Island, or the South Side.  When trolling deeper waters we would often use a combination of a weight in front of the tube as well as use steel line. When it comes to catching stripers, the steel line helps get the tube toward the bottom where the bass hang out. Otherwise you may end up catching the blues that are swimming above the bottom.

We would always have to carefully ensure we were as close to the bottom as possible, however, not dragging. This would require monitoring trolling speed, and water depth via sounder and/or fish finder. The finder would be particularly useful to help us understand when the lines/tubes may be passing the fish.  Ultimately, this usually means we may get some hits soon.

When in shallower waters, like the rip out at Block Island, just be sure to either not use any weight, and, shorten the line considerably. This way you are sure your tube and worm will not drag the bottom. 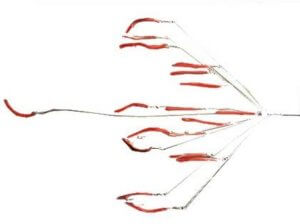 Regardless of the method you choose, the tube and worm will not let you down. And something to consider is the Worm Rig Spinner lures. It’s something like a tube and worm, however, the tubes are far shorter, there are many more of them, and, you do not use worms. We’ve landed several bass and blues at a time using this and similar rigs.

Live bait can be interesting. When we first started fishing the waters of New England we used live bait often. And when I say live bait I mean Mackerel and eels mainly.

Regarding mackerel, once the water warms and we’d begin our fishing season, we used to start our trips looking for the birds. The birds would point us directly to the mackerel breaking the surface. We’d then drive the boat up to the school of mackerel and use our spinning rigs, outfitted with a single weighted treble hook and cast directly into the middle and start reeling in quickly and jerking the rod.

Most often you’d hook up on a mackerel. Just bring it on in and put it in the live bait well. Once we had enough of these we’d head out fishing. Initially we used to fish Narragansett bay quite a bit. 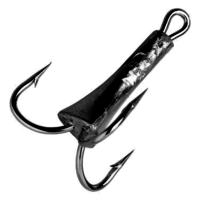 The Live baits can be fished several ways. Mackerel would typically be fished while drifting. Though we did troll with them on occasion. Initially we used to use a single hood at the top of the mackerel.

What we found is that although the striped bass like the mackerel quite a bit, we lost many of them because the hook quite often would not set well. This would be regardless of how long we let the fish run. What we did is swap out the single traditional hook for a treble hook.

And although it was more work removing the hook from the net and fish once landed, we sure did bring in more stripers!

When it comes to ensuring the best possible fishing charter experience, you have to be flexible.  What is meant by this is know when you have been at an unproductive site too long.

Go to another site and see if the fish are biting there.  If not try another fishing location.

Being a seasoned charter boat captain means you have a gps map of many productive fishing spots.  Use them when you need to.  Customers love to catch fish!

This is Aces Wild signing off for today.

Hope to be fishing the 2020 season sometime soon!