Fishing in Rhode Island begins in April and ends sometime in November.

Fishing in Rhode Island begins in April and ends sometime in November.

Below we have listed the various species that can be targeted on our trips with explanations of when they show up so we can fish for them.

Striped Bass.  Striped Bass begin to show up around the end of April in the southern-most part of Narragansett Bay.  They quickly shoot up the bay to the Providence river chasing hering and menhaden.  The big push of Block Island fish don’t show up until around June 7-9 (near father’s day) and then the fishing is crazy for several weeks through the end of June and often into July.  We fish for them from June through to sometime in October or November.  The best fishing is normally very early morning.  The best time of year is normally June, when the fishing is crazy.

Bluefish.  Nasty and aggressive predatory fish with big teeth and a lot of fight.  Bluefish normally show up sometime in June.  We don’t see large numbers of them until July rolls around, then we can specifically target them.  There tends to be a large number of bluefish around from the beginning of July through to September and October.  Sometime in October they’re gone. 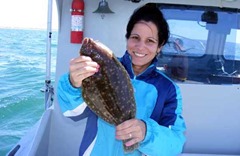 Tautog.  Called Blackfish in other parts of the country, these are the toughest fighting fish you will ever catch.  They are also the best eating fish in New England waters.  We target these at the very beginning and the end of the season.  It begins in April when the tautog season opens and we fish for them until the Stripers begine showing up.  Then we target stripers, blues, and flounder mostly through the season until around October 17 when the Tautog season regulations change from 3 fish per person to 8 fish per person.  Then we target tautog until sometime in November.

Scup.   Scup begin to show up sometime in mid to late June and are around until sometime in October.  We normally don’t do trips specifically targeting scup until September, when the charter boat regulations change to 45 fish per person which lasts until October 15th.  During the rest of the year we can only keep 10 fish per person.
Tunas.   False Albacore and bonito are usually the first species we target as they show up on the inshore grounds chasing the large amounts of bait that are typical in Rhode Island.  This normally happens sometime in July or August when the water is warmer.  They can hang around form then until sometime in October.  Usually the first big storm in October will drive them off.