Headed out to southwest corner under cloudy skies.  Water was as calm as a pond.  Dropped frames and started trolling.  A short time later we finally hooked up a large bass.  The young man in the photo reeled the fish in the entire way after about 20 minutes of fighting.  Could not believe the size.  It was a 30 pounder.  He also caught a 15 pounder.  The young man with him also caught a 15 pounder and a bluefish as well.

Had a great day!! 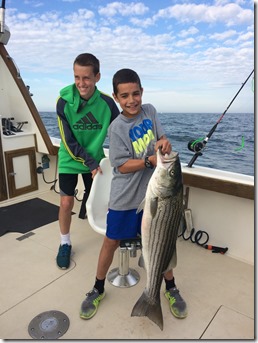